Review: The Knockoff by Lucy Sykes and Jo Piazza 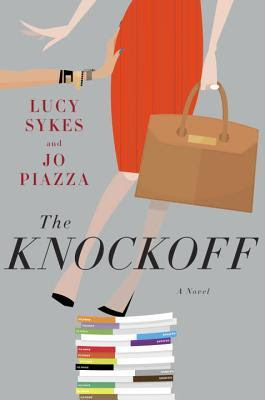 The Knockoff by Lucy Sykes and Jo Piazza


An outrageously stylish, wickedly funny novel of fashion in the digital age, The Knockoff is the story of Imogen Tate, editor in chief of Glossy magazine, who finds her twentysomething former assistant Eve Morton plotting to knock Imogen off her pedestal, take over her job, and reduce the magazine, famous for its lavish 768-page September issue, into an app.

When Imogen returns to work at Glossy after six months away, she can barely recognize her own magazine. Eve, fresh out of Harvard Business School, has fired “the gray hairs,” put the managing editor in a supply closet, stopped using the landlines, and hired a bevy of manicured and questionably attired underlings who text and tweet their way through meetings. Imogen, darling of the fashion world, may have Alexander Wang and Diane von Furstenberg on speed dial, but she can’t tell Facebook from Foursquare and once got her iPhone stuck in Japanese for two days. Under Eve’s reign, Glossy is rapidly becoming a digital sweatshop—hackathons rage all night, girls who sleep get fired, and “fun” means mandatory, company-wide coordinated dances to Beyoncé. Wildly out of her depth, Imogen faces a choice—pack up her Smythson notebooks and quit, or channel her inner geek and take on Eve to save both the magazine and her career. A glittering, uproarious, sharply drawn story filled with thinly veiled fashion personalities, The Knockoff is an insider’s look at the ever-changing world of fashion and a fabulous romp for our Internet-addicted age.

The Knockoff was a bit too formulaic for me to really get into it -- it's definitely a fast read and probably one that would be good for the beach.  However, I got a bit bored by the over-reaching millennial Eve that takes over the magazine in this book, turning it into an app and just acting completely ridiculous throughout the entire book.  Imogen, on the other hand, the Editor of the magazine, was a bit too perfect.  She was always nice, completely gorgeous, had a perfect family and basically all her dreams came true by the end of the book.  I love a HEA but this book made me think, why do I care?

I would recommend this to anyone that liked The Devil Wears Prada, or anything by Candace Bushnell.  This book has the same insight into the fashion world and surviving in NYC.  The Knockoff was just released earlier this year, and you can purchase HERE!

Imogen's heart sank.  Nothing she did was going to help.  Eve had the manners of a psychopath.  It was in these moments that Eve reminded Imogen of her old dog growing up, a Jack Russell who had been perfectly well behaved in their London flat, but revealed his true colors on a day trip out to Kent.  Nutkin forcefully escaped from an open car window, running straight toward a small lamb that had been caught in the barbed wire at the edge of a filed, its leg bent at a ninety-degree angle and bleeding.  Once Nutkin smelled blood there was no turning back.  He was an attack dog cloaked as a city dog.  The shepherd's boy got Nutkin with his shotgun shortly after the dog killed the sheep.  It was Nutkin's fate.  He was born like that.  Eve was born like this.