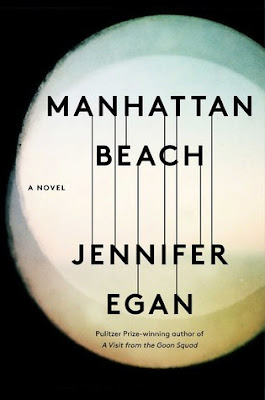 Manhattan Beach opens in Brooklyn during the Great Depression. Anna Kerrigan, nearly twelve years old, accompanies her father to the house of a man who, she gleans, is crucial to the survival of her father and her family. Anna observes the uniformed servants, the lavishing of toys on the children, and some secret pact between her father and Dexter Styles.

Years later, her father has disappeared and the country is at war. Anna works at the Brooklyn Navy Yard, where women are allowed to hold jobs that had always belonged to men. She becomes the first female diver, the most dangerous and exclusive of occupations, repairing the ships that will help America win the war. She is the sole provider for her mother, a farm girl who had a brief and glamorous career as a Ziegfield folly, and her lovely, severely disabled sister. At a night club, she chances to meet Styles, the man she visited with her father before he vanished, and she begins to understand the complexity of her father’s life.

Mesmerizing, hauntingly beautiful, with the pace and atmosphere of a noir thriller and a wealth of detail about organized crime, the merchant marine and the clash of classes in New York, Egan’s first historical novel is a masterpiece, a deft, startling, intimate exploration of a transformative moment in the lives of women and men, America, and the world.

This one starts really slow and I honestly wasn't feeling it until almost half way into the book.  But then it picked up and I could not put it down!  All the zigs and zags added up and I loved Anna like my own. Historical fiction is hit or miss for me but this one was so good that I almost forgot it was fiction.  I was invested and I had to know what happened next. I'm not sure what I was expecting but it wasn't this. Even if you're not drawn to historical fiction (like me), I would recommend this one - it brought something new to living in New York during World War 2 and it was so honest and refreshing.

Manhattan Beach comes out TODAY October 3, 2017, and you can purchase HERE.  I really loved this one and you will too, especially if you're a fan of historical fiction.

As he smoked, Eddie returned to his worry about Anna as if it were a stone he'd placed in his pocket and now could remove and examine. He'd taught her to swim at Coney Island, taken her to Public Enemy and Little Caesar and Scarface (over the disapproving looks of ushers), bought her egg creams and charlotte russes and coffee, which he'd let her drink since the age of seven. She might as well have been a boy: dust in her stockings, her ordinary dresses not much different form short pants. She was a scarp, a weed that would thrive anywhere, survive anything. She pumped life into him as surely as Lydia drained it.