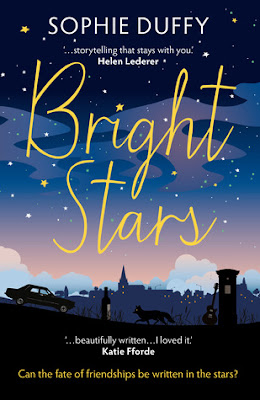 
Four students are involved in a tragedy that rips their friendship apart. What happens when they are reunited 25 years later?

Cameron Spark’s life is falling apart. He is separated from his wife, and awaiting a disciplinary following an incident in the underground vaults of Edinburgh where he works as a Ghost Tour guide. On the day he moves back home to live with his widowed dad, he receives a letter from Canada. It is from Christie.

Twenty-five years earlier, Cameron attends Lancaster University and despite his crippling shyness, makes three unlikely friends: Christie, the rich Canadian, Tommo, the wannabe rock star and Bex, the feminist activist who has his heart. In a whirlwind of alcohol, music, and late night protests, Cameron feels as though he’s finally living; until a horrific accident shatters their friendship and alters their futures forever. Christie’s letter offers them a reunion after all these years. But has enough time passed to recover from the lies, the guilt, and the mistakes made on that tragic night? Or is this one ghost too many for Cameron?

I hate to say it but although this book was (mostly) beautifully written, it was so, so depressing.  That is, this book is ultimately about looking back on your life 30 years later and realizing how horrible it is to get old and to have regrets.  Ostensibly, the characters' regrets stem from one night and a whole lot of lies but there was just this overarching sadness in the book concerning aging and death.  The beginning of the book really dragged on but it did get better as the event and secrets were revealed.  Ultimately, I couldn't help but feel sad at the end of the book since everything that happened was so heartbreaking.

I would recommend this to fans of contemporary British literature written by women -- it definitely had a similar voice as  other authors such as Susan Lewis.  Bright Stars was just released last week, and you can purchase HERE!

By the end of the song, I'd slid down the wall, was slumped on the dirty fag-strewn floor, cross-legged, head in my hands trying to stop the small monkey pogoing around inside it.  I was back in the class room, the boy on the edge, listening to the popular kid reading out his work.  I didn't know why, but I was on the verge of tears.