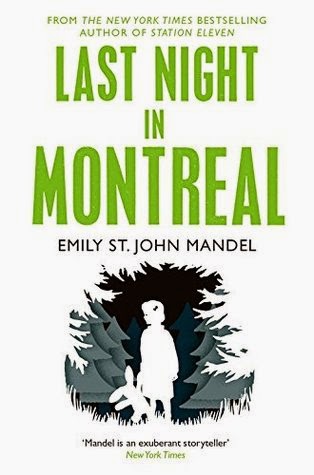 
Lilia has been leaving people behind her entire life. Haunted by her inability to remember her early childhood, and by a mysterious shadow that seems to dog her wherever she goes, Lilia moves restlessly from city to city, abandoning lovers and friends along the way. But then she meets Eli, and he's not ready to let her go, not without a fight.

Gorgeously written, charged with tension and foreboding, Emily St. John Mandel's Last Night in Montreal is the story of a life spent at the centre of a criminal investigation. It is a novel about identity, love and amnesia, the depths and limits of family bonds and - ultimately - about the nature of obsession.

I am an Emily St. John Mandel believer!  After reading both Station Eleven and Last Night in Montreal in the past week, I feel a bit ruined for other authors.  Her writing is haunting -- absolutely gorgeous.  I am reminded of my favorite of all time, Donna Tartt.  I hate to compare the two books but there are definitely a few similarities aside from the beautiful writing -- the reliance on and reference to the Icarus myth as well as the theme of traveling and constant movement.  Admittedly, Station Eleven is a bit more refined (Last Night in Montreal is her debut which has just been re-released, probably due to the HUGE success of Station Eleven) but I love them both.


It's silly to say but reading Emily St. John Mandel's books makes me want to write -- she has crafted such beautiful sentences, descriptions, allusions that I can't help but feel inspired.  However, I know that I could never write something as hauntingly gorgeous as both of these books -- I know they will stay with me and I will re-read them until they become a part of my own memory.  I can't wait to read more from this author!

Last Night in Montreal was just re-released, and I highly, HIGHLY recommend it!