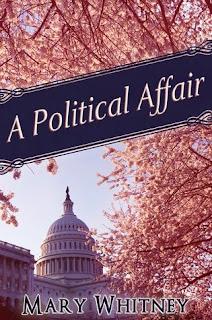 A Political Affair by Mary Whitney

A Political Affair isn't Fifty Shades of Red, White, and Blue, but it is a love story with spice and political intrigue. Stephen McEvoy never expected to fill his father’s U.S. Senate seat at such a young age—or to fight to keep it. When clever Anne Norwood interns in his office, Stephen dismisses her as another pretty face—until her independent streak catches his attention. They’re both too smart to fall for one another, yet they do. During a tough election, their relationship is an impossible political gamble. Campaigns—like love—are either won or lost.

This is the first book in a long time that I stayed up all night reading once I started it! I loved it! It is the perfect antidote for the end of election season.

Anne is an intern in Senator Stephen McAvoy's office and, from her first day in the office, there is an unmistakable pull between them. Of course, a relationship between them would be taboo and so a friendship begins. However, it isn't too long before their friendship turns romantic. I loved their courtship and growing relationship -- it was very romantic and my heartstrings pulled for them having to keep it secret.

I loved the interplay between the inside workings of Washington versus the real need to have a relationship that was not defined by those trappings. All the characters were well developed and extremely well written.

I hate to give away the ending but my favorite part was definitely the elopement! It was so magical and I loved all the reactions to it.

A Political Affair is a well written, political romance!